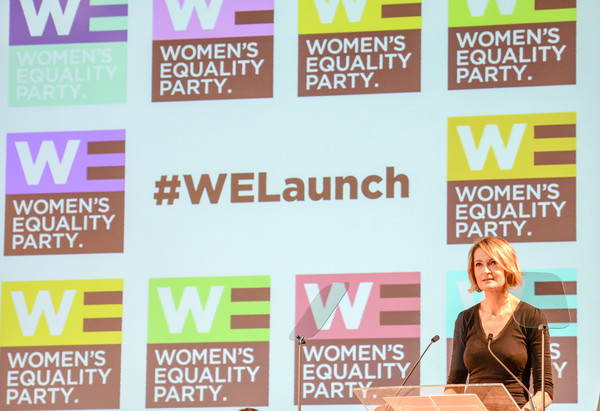 Back in the Spring of 2015, something amazing happened.

While participating in a debate about women in politics at the WoW Festival, journalist Catherine Meyer proposed the creation of a Women’s Equality Party. She contacted Sandi Toksvig the next day, who confessed that she had been planning to propose the same thing at the closing speeches.

Fast forward to Summer 2015 – WE opened for membership on 3rd July, and Sophie Walker was announced as the party leader just over two weeks later.

By the time WE rang in the New Year, it had launched its first policy statement, recruited a sizeable membership to rival that of UKIP, and announced its intention to put candidates into the 2016 London Mayoral, London Assembly, Welsh Assembly and Scottish Assembly elections. Oh, and crowdfunded the £31,000 needed to support said candidates – in just one week.

As someone who has previously been bored to tears by politics and found little inspiration in any of the current political parties, discovering WE was a revelation.

Accuse me of exaggeration if you will, but have you ever read a policy document cover to cover? I hadn’t. Sounds deathly boring. Yet, that’s exactly what I did with the WE manifesto. The day after the launch event, I quietly plugged my earphones into my work computer, and listened to the recording, twice over, holding back the tears.

I can’t fault anyone for having different politics to me, there may be a plethora of differently-minded individuals who read the Conservative manifesto this time last year, poring over each and every policy and welling up at the thought of five years of an unchallenged Tory government – laugh if you will, but if we learned anything from the 2015 election, it’s that Shy Tories are a thing!

The point is, I didn’t have any politics. In the 2010 election, I voted Liberal Democrat because I liked Nick Clegg, and he seemed to be a comfortable middle ground between Labour and Conservative. Surprisingly enough, exercising my right to vote by picking the best of a confusingly bad bunch was not particularly empowering.

Now, however, I’m proud to hold my hand up and say I believe in WE, this is politics I understand and fully support. I’ve found a party with policies I believe are long overdue, that say gender inequality is not okay and it’s no longer acceptable to be a silent MAJORITY in the population that’s treated as if it were a minority. More importantly, I’m delighted to have found a company of women who realise that men need to be part of this too. One of the cornerstones of the policy document was that inequality in childcare and parenthood adversely affects fathers just as much as mothers. For all the fathers out there who would rather be parenting their children rather than “babysitting” them, this is a place for you too. It’s one example, but the point is that the fight against sexism will benefit men in the long run, WE are not an anti-men party.

I firmly believe in being the change you want to see in the world – I want gender equality, and I’m prepared to put my money and my vote where my mouth is. WE is a single issue party, and it may well be that we don’t win the election in 2020, but what if we made people sit up and think? Arguably, the main parties wouldn’t have been pushed so hard on immigration and climate change, had it not been for the success of UKIP and the Green Party.

Being a feminist doesn’t automatically oblige you to be part of a women’s party, there are many, many proud feminists fighting our corner from within the main parties that deserve our recognition and support. But for those who don’t have any politics, out of sheer confusion and disillusionment rather than active choice, take a look at what WE stand for. Even better, sign up and have your say in the candidates we’re putting forward for the May Assembly and Mayoral elections.

Whatever it is you do, do something. Your voice matters.