In honour of Time to Talk Day, I thought I’d revisit the story of GAD and Wanda, told through the medium of Inside Out Bitmojis. Because, why the hell not?

A couple of people said that when reading my last post on GAD and Wanda they were sometimes confused between the two. It’s understandable, but that is also partly the point – my head can be a pretty confusing place to be!

However, let’s look at it a different way. 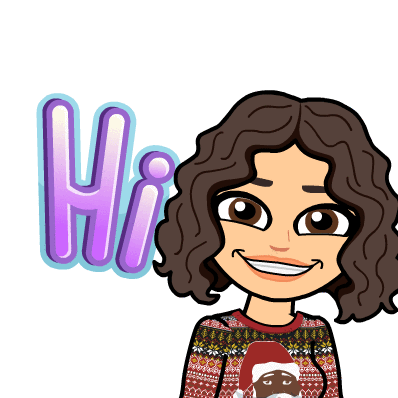 In a Christmas jumper – I’m a fan.

You may remember Wanda, my inner voice. Most people have an inner voice, yours might be called Norman. Or Princess Consuela Banana Hammock. I’m not here to judge. 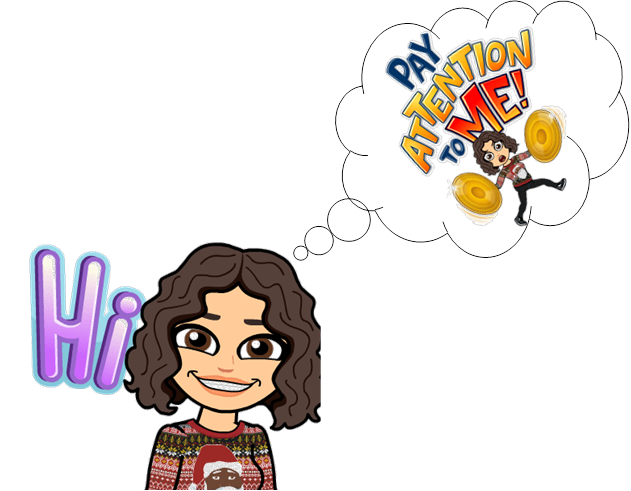 Then there’s GAD (Generalised Anxiety Disorder). GAD isn’t exactly a person, I occasionally refer to it as a ‘he’ for no particular reason, but it’s not a person so much as a f***ing inconvenience. The best way I can think to illustrate GAD is as a big grey cloud: 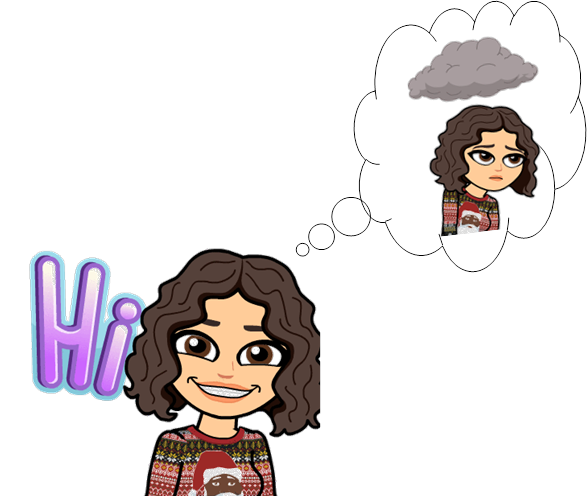 This isn’t strictly the best way, because I guess this looks like GAD makes Wanda sad. Sometimes this is the case, but more often it makes her scared, crazy, angry and everything in between. I’m limited by my Bitmoji range ok?

In fact, what better to help me clarify than Inside Out. Oh the wonder of Disney!

If you haven’t seen the movie – shame on you – it’s about a kid called Riley who’s having a bit of a rubbish time after moving house and leaving her life behind. The story is told through the lens of the emotions in Riley’s head – Joy, Sadness, Fear, Anger and Disgust.

The moral of the story is that Joy tries to prevent Sadness from ruining everything, but learns that actually everyone needs all five emotions in balance to truly be happy. Aww 🙂

Now then, our inner voices will be influenced by our emotions. When you’re feeling sad, your voice will say something along the lines of “can we just go home and curl up in bed please?”; if you’re happy it’s probably scooting around on a rollercoaster going “weeeeeeee!”. It can also work the other way round – if your voice is being critical of you, that might make you sad etc., but let’s keep it simple for now.

My assumption is that the typical person has these emotions in some kind of balance. Of course it’s not balanced all of the time – as Disney showed us, Joy can reign over everyone in childhood. There will also be bad patches where Sadness may take hold. But the assumption is that the default setting is balance.

As we know, the D in GAD stands for Disorder – aka the antithesis of balance. The way it causes Disorder is by making Fear too big. Like so:

Sadness, Anger and Disgust are about the same – though to be fair they sometimes get made big too. It’s only Joy who gets made smaller – anxiety can be a bit of buzzkill.

Remember, good mental health is all about balance. Fear is incredibly important! Fear makes you question the safety of skydiving; tells you to run away from a bear (Leo, your Fear impulse needs work mate) and suggests to you that eating the pink chicken might be a poor decision.

However, Too-Big-Fear kicks in that impulse at pretty much everything and nothing. Sometimes, actual nothing. On an average day, this impulse makes Wanda look like this: 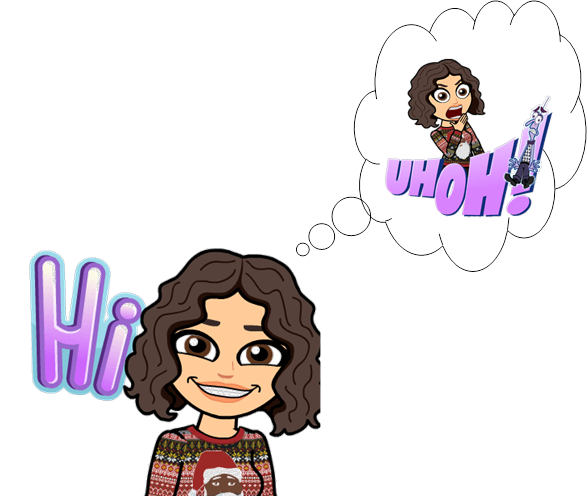 This could be in response to a friend saying something slightly offhand. Wanda has a mild panic:

“Did we say the wrong thing? Do they hate us now? It wasn’t intentional! That’s so mean! Ah yes, but then everyone does secretly dislike us. Damn.”

This is relatively minor, and usually can be reasoned with to redress the balance, and bring Joy back into the picture:

“Yeah but remember that time they said X and you did Y and it was so fun, and they’re your friend, there’s love, it’s fine! They’re probably having a bad day.”

On a bad day, Too-Big-Fear makes Wanda look like this: 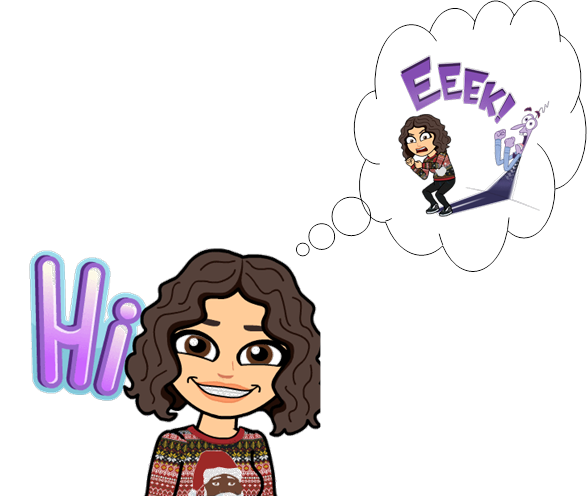 This is where it is no longer just anxiety, but actual fear starts to be mixed in. This could be a reaction to a funny noise in the flat or being out alone at night.

Now, clearly this is bad. Hence why this is a bad day. However, we can sometimes shoehorn some reason in here too, particularly if someone else is around.

“The flat is really creaky, remember? That noise happens every night. Plus Boyf’s sitting right next to you and he doesn’t seem to think it’s a problem.”

“There is someone behind us, but it’s that woman walking her dog – totally fine.”

Or (if we’re desperate):

“Yep, we’re probably going to die, but there’s not a lot we can do about it so why worry? Hopefully it’ll be quick.”

The final setting is full throttle Fear. In this instance, GAD has supplied Too-Big-Fear with a steamroller and he’s crushed everything else in his path – including Wanda. Like so: 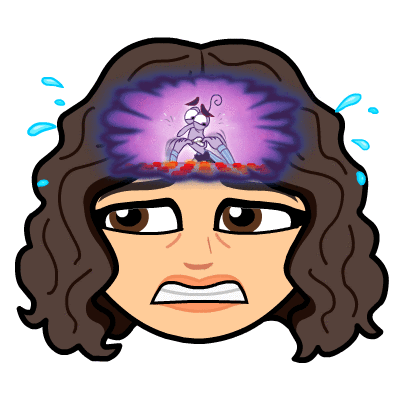 I’ve been incredibly lucky to have never suffered any full scale panic attacks, but this is close. It’s usually facilitated by sleep deprivation and stress and triggered by something small. Here, there is no Wanda anymore, there is only Pure Fear. That isn’t to say that I don’t hear my inner voice any longer, but it is entirely driven by Fear telling me that there is an attacker in every room, outside the window, following me everywhere. Or that right now someone I love is dying or in pain.

This state will now filter to physical symptoms, my head feels a little fuzzy and tension builds in my chest, brought on by increased adrenaline. I may feel unable to go into a certain room, or unable to move at all. Sometimes unable to speak. We often hear about “Fight or Flight”, but there’s actually a third ‘F’ called “Freeze” – almost total paralysis, in my experience. The article I’ve linked to describes it as a response that is activated when there is no hope.

Unfortunately, there’s little logical reason to be had by this point. Any offered will be swiftly given the steamroller treatment – Boyf isn’t phased because he just hasn’t heard it. The woman behind us walking her dog could still be an axe murderer; if anything, assuming she can’t be one because she’s female is SEXIST (yep, we go there!). The only solution is to wait it out one second at a time.

Luckily this is a rare occurrence these days, where therapy and a lot of self-analysis has helped me understand what triggers such a state and how I can avoid it. It isn’t going to suddenly disappear, but I’m more likely to be able to tell GAD: 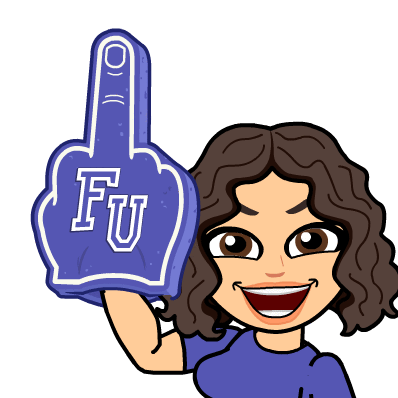 It’s not just my head, it’s 1 in 4 people who have some kind of mental health condition that throws everything off balance and makes everyday existence surprisingly challenging. More often than not, talking helps. But it’s stigma, prejudice and a lack of understanding that silences people before they’ve even opened their mouths.

Today is Time to Talk Day for a reason. We wouldn’t need a day if people were already doing it. Please spread the word that there is no shame and no stigma. You don’t have to have a problem to be able to help someone who does, often just by offering to listen.

If it’s you who is feeling like this, click here to talk to someone who can help you. You’re not alone, there is always someone in your corner.

I know what you’re thinking. You’ve finally made it to the end of this beast of an essay and all you really want is to know how to get your own Bitmoji. Joy be yours my friend!

One thought on “Thinking || Anxiety Inside Out”