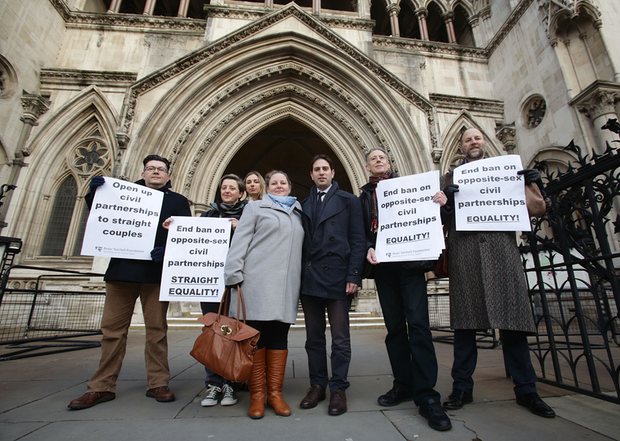 This morning the Court of Appeal ruled against Rebecca Steinfeld  & Charles’ Keidan‘s attempt to overturn the ban on heterosexual couples entering into civil partnerships – but why does this matter?

When their petition first launched, I didn’t really see the big deal. What’s the difference between marriage and a civil partnership if you know you want to be together? Particularly when civil ceremonies allow couples to marry outside of any religious institution, surely it’s just semantics?

I was fully on board with the other side – the importance of same sex couples being allowed to be married. Without going into the religious conversation (religious freedom vs. the right of the same sex couple to marry within their chosen faith), the religious and patriarchal heritage of our country has meant that marriage is very much presented as the pinnacle. Socially, women have not really achieved anything until they’ve persuaded a man to marry them and seen off the insidious threat of SPINSTERDOM and BABYLESSNESS. Marriage is the shiz. Therefore, same-sex couples being given ‘civil partnerships’ felt dissatisfying; a “be grateful you have anything” kind of compromise when we all know that it’s not the same kind of big deal as marriage. Because of that, it made even less sense to me that heterosexual couples would want that; they are given the option of marriage without even asking for it, so why would they want something that the government have been fobbing same-sex couples off with?

Then I got engaged.

(To be clear, I am delighted about this, despite how much I’m about to trash the institution of marriage…)

I’ve been quite vocal within my circle of friends about my feminism in this area; how I’m not interested in changing my name if my fiance isn’t going to do the same; how far too many wedding ‘traditions’ are steeped in patriarchy it’s almost nauseating etc.; but even I didn’t really understand how deeply ingrained it was until we actually got engaged. To be fair, I’ve been lucky – there have been questions but very few assumptions around name changing, white dresses, churches etc. (though we’re still early days). However, the sexism around the whole thing is still rampant and it goes both ways – there’s been a very evident assumption that the wedding will be all about what I want and that my fiance won’t be involved which is insulting to both of us. EVERYTHING wedding-related is overtly geared towards women. I’m not saying that this comes out of nowhere, I’m aware that there are plenty of men who aren’t particularly interested in wedding planning, but much like the beauty and fashion industries in general, it is ultimately damaging to both sexes to assume that this is always the case.

On the patriarchal front, the heritage of marriage was effectively the act of a father transferring ownership of his daughter to another man. Only the woman wears the engagement ring, because she needs to be wearing something that demonstrates to the world that she is ‘taken’. The father walks the daughter down the aisle and physically transfers her hand from his to the groom’s, before publicly stating that he gives this woman to be lawfully married. She wears a white dress to symbolise her purity, aka her virginity aka proof that another man hasn’t had his wicked way and made her impure aka proof that any babies they have will be the groom’s aka the transfer of family wealth will continue down the male bloodline. The phrase ‘she had the baby out of wedlock’ was because marriage was a LOCK. I could go on, but you get the picture.

On the religious front, we can’t escape the fact that marriage is a religious institution, and the laws associated with marriage come from our heritage as a Christian country. I want to do a marriage preparation course because I firmly believe in this decision being a lifetime commitment, so it’s probably a good idea to do some preparation and ask some serious questions before we leap in all giddy and newlywed; but even these are religious in heritage, originating from the traditional conversations with a priest prior to getting married in a church. Consequently, we can go to courses that promise not to mention God, but the organisations will still have started out providing the courses for religious couples.

So the option is marriage or not marriage. Well why not – if you really love each other, who says you have to spend a crap load of money on a wedding and get up in front of all your nearest and dearest to prove your commitment? Umm…the government. It might not be illegal to be an unmarried couple, but the law will certainly not be your friend if the relationship does break down or one partner dies, especially if you have property or children.

So really, the option is marriage or playing russian roulette with your legal rights whilst grieving your relationship or your long-term partner.

I’m happy with our choice; despite the patriarchal and religious associations, I would rather be married to my fiance than not. I’m happy that we can overcome the patriarchal crap enough to give us something that is meaningful and wonderful. He is happy changing his name too, so that we can start this journey together; we will be having a civil ceremony and even if I choose a white dress I’m reasonably confident he’s not under any illusions about my ‘purity’. When I look at the engagement ring he had designed for me, I see only the level of thought he put into what my perfect ring would look like; I see only his depth of love for me and mine for him.

But the point is – that’s our choice. If someone came to me and said that because you are a heterosexual couple, you must marry in a church, you must change your name to his, do this, do that and the other, I may well choose not to marry at all.

To some, this debate may smack of a heterosexual couple complaining about something trivial as if it’s the same as the homophobic justifications for denying marriage to same-sex couples. Same-sex couples have endured (and continue to endure) prejudice and compromise to be able to get married, so quite whining! However, as I’ve been slowly awakened to the staggering inequality in the UK and around the world, I’ve started to see how far-reaching the consequences are of continuing on with certain traditions because it’s how we’ve always done it. How certain words are deeply rooted in prejudice, yet we still continue to use them.

I don’t believe that the fight for heterosexual civil partnership is on the same level as the fight for same-sex marriage; but I am fundamentally opposed to a heterosexual couple having to choose between buying into an institution that is rooted in prejudice and inequality or being denied various legal and economic benefits because they do not do so. Why should any one of us have to compromise our principles to meet the rules of a legal system that masquerades itself as fair and just when we have overwhelming evidence that it is neither? How is that equality?

If you are interested in supporting this issue, you can sign Charles & Rebecca’s petition or donate to enable them to continue the fight.