Okay team, in the last post we made it all the way to number 6, but will you agree with the top 5?? SO MUCH PRESSURE! 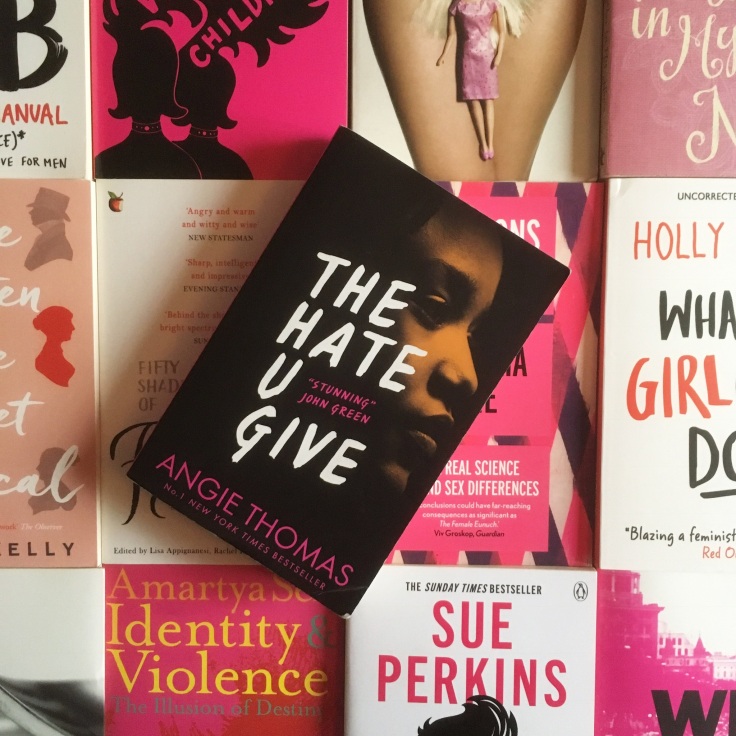 If you haven’t heard of this book I can only assume you’ve been hiding under a rock as it’s winning all the awards and breaking all kinds of records. This YA novel is from debut author Angie Thomas, inspired by the music of Tupac. It follows Starr, a 16-year-old girl treading an uneasy balance between the poor neighbourhood she lives in, and the posh prep school she attends. When she witnesses the fatal shooting of her best friend by a policeman, she soon becomes the centre of a media storm. Thomas brings police brutality and the Black Lives Matter movement to life in a compelling and character-driven way. Soon to be a film starring Amandla Stenberg and Common, this should definitely be high on your TBR for 2018.

A couple of years ago, I read a book called The Twelves Tribes of Hattie by Ayana Mathis. Each chapter was the story of a different child, most of whom aren’t revisited at any other point in the book. It was tantalisingly short, I finished the book wanting to know more, but in a way that made me love the book rather than hate it. I was so hooked on the characters that I went back and reread it straight away (this was in the glory days where I didn’t read very often and had virtually no TBR!). I haven’t read another book like that – until now.

Homegoing starts with two half sisters who have never met. One is sold into slavery, the other marries a slave trader and thus begins a family tree that follows the history of slavery and race relations in the USA and the development of modern day Ghana. Like Hattie, each chapter follows one descendant, alternating between the two sides of the family tree. This is the essence of a character-driven novel and I wanted to reread it pretty much instantly. Unfortunately, my prohibitively long TBR means I’ll have to come back to it another day…

#3 – My Grandmother Sends Her Regards and Apologises by Fredrik Backman

Now then. Into the top 3. This was a late entrant into the list, so there could be some recency effect here, OR IT’S JUST BRILLIANT. Who knows, I’ve lost objectivity. I read Backman’s debut, A Man Called Ove, last year and fell in love with Ove. Such a cantankerous old whatsit who you can’t help but feel affection for. So there was always going to be a risk with the next one – could it possibly be as good?

This is the story of Elsa, a little girl trying to process the loss of her beloved grandmother and best friend. Granny was a bit of an old boot so her last request is for Elsa to deliver an apology letter; and so begins a quest that will open up the little girl’s world in a way she hadn’t imagined. Full of heart, chuckles and character, it was every bit as good as Ove, in a Hug-To-Your-Chest kind of way.

Just thinking about this book makes me cackle. Lawson is completely nuts – and she would be the first to admit it. This is a frank, honest and HILARIOUS memoir about living with mental and physical illness. On multiple occasions, I tried to read excerpts aloud to my fiancé, only to dissolve into fits of laughter before I could finish. I particularly loved the depiction of her marriage to Victor – he seems so exasperated but you can tell how much love there is between them. As someone with a mental illness and a mentally well fiancé (as far as we know…), it gave me the warm and fuzzy feeling that we can probably make it through anything as long as we keep laughing. I can’t really say anything else about this book, because most of what I remember is the giggles, and that was enough to know it had to be high up on my list.

Aaaaaand the number one iiiiiisssss…..

#1 – The Glass Castle by Jeannette Walls

Ta daaaa! Unlike the others, this is not a new book. It was published in 2005, but I’d never heard of it until my friend loaned it to me before we went to see the film. I. Could. Not. Put. It. Down. I messaged friends about it. I read parts aloud to my fiance. I searched the hashtag on Instagram JUST TO TALK TO SOMEONE ABOUT IT.

This is the memoir of Walls’ childhood with the most dysfunctional parents I’ve ever come across. The dad was an alcoholic who moved his family from place to place to run from the “mafia” (read: debt collectors); the mother was a flighty, neglectful hippy. When she was three, Walls set fire to herself while cooking sausages unsupervised. Her dad then sprung her out of the hospital claiming the doctors didn’t know how to treat her because they disagreed with his opinion that burns should breathe rather than be bandaged. There was also the time when the kids hadn’t eaten in days and they found a diamond ring; the mother kept it as a replacement engagement ring, rather than selling it to buy food. There are so many examples, it blew my frigging mind. I’ve subsequently gifted it to two people and recommended it to many others.

What’s particularly fantastic is that Walls tells all of these stories with clarity and honesty and not a hint of self pity. Some of the stories are truly horrifying, but I was able to read it as an observer, rather than feeling dragged down by drama and trauma. It’s a tricky thing to achieve and Walls did it with aplomb.

Unfortunately, the film adaptation was a classic example of Hollywood Dick Dousing, as it was all about the father – the tortured alcoholic who we are invited to sympathise with for all his faults. The mother’s equally neglectful behaviour was erased and the ending was atrociously romanticised to the point of being nauseating. If you are at all interested in this story, I beg you to read the book first.

HOWEVER, if you are not much of a reader, I wouldn’t completely write off the film. I realise this sounds like a contradiction, but I think that if I hadn’t read the book, I wouldn’t have had that comparison and might have otherwise enjoyed it. The adaptation from book to film is terrible, but the acting is excellent (I wouldn’t expect anything less from Brie Larson and Woody Harrelson) and it could have been the type of film I would have previously loved.

There we have it! PHEW. I don’t have to make that kind of decision again for another 12 months. Let me know what you think of the list – any you particularly agree or disagree with? What would be in your top ten?