I don’t know where February went (half of it was spent in a flu-induced delirium), but somehow Mr A-B and I managed to drag ourselves out to the cinema once or twice…

Thanks to my Cineworld Unlimited card (not a sponsored post), my latest film count is 13 in two months putting us nicely ahead of our target of 52+ films in 2020. For my thoughts on the films I saw in January (some of which I’m sure will still be showing somewhere!), head to my previous posts. For my thoughts on what you should be seeing this weekend, keep on reading! 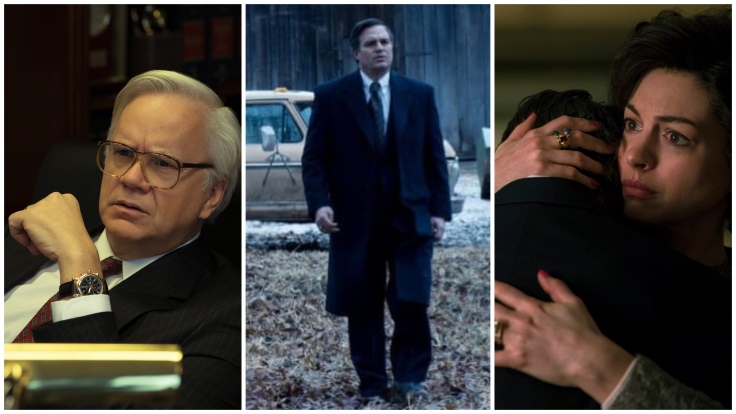 Mark Ruffalo plays Rob Bilott, a real-life corporate defence attorney who puts his career on the line by taking on an environmental lawsuit against chemical giant DuPont. When Bilott is visited by a farmer from Parkesburg, West Virginia about the death of his cows, the attorney initially dismisses the case. However, as a gesture of kindness, he visits the farmer and begins to uncover the extent of the poison DuPont has unleashed on this community.

This film is basically Spotlight meets Erin Brockovich. While Bilott may not have the personal charisma to call him the male Brockovich, his humility and dogged persistence in the face of overwhelming challenge is incredibly compelling, and Ruffalo played it perfectly in my eyes. With Tim Robbins and Anne Hathaway in support, this is a film that is highly worth seeing, even if you leave the cinema with the vastly uncomfortable knowledge that the ‘forever chemicals’ at the centre of this tale are currently swimming around all of our bodies…

Yet further evidence that women should be directing more superhero movies (see Wonder Woman, Captain Marvel etc.) as Birds of Prey sits heads and shoulders above the great many male-fronted alternatives that DC has put on offer – but if you’ve seen Suicide Squad, this will not be a surprise to you.

It’s colourful, gruesome, FUN and includes multiple different women kicking ass, what more do we need? I will say, Ewan McGregor was not my favourite, he was fine enough but his accent was a bit dodgy; luckily this just cleared the way for Margot Robbie to shine. I also really want whatever lipstick she was wearing whilst doing the shining. She hasn’t replaced Wonder Woman in my affections, but luckily I have room in my little feminist heart for both of them (AND MORE PLEASE).

The trailer of adaptation number twenty thousand of Jane Austen’s most unlikeable heroine left me feeling sceptical at best. Anya Taylor-Joy’s Emma seemed more bratty than ever and among other dubious casting choices Johnny Flynn was FAR too young to play Mr Knightley. Nevertheless, I struggled through the book for a reason so I was committed to giving it a go.

I will admit my judgement was clouded by:

The indisputable star of this show was Bill Nighy, frankly he did not get enough screen time. Austen’s Mr Woodhouse is an anxious hypochondriac, who, after 500 pages, had become incredibly tiresome. Nighy elevated him to hilarious, loveable and generally GLORIOUS, and the film is worth seeing for him alone!

I loved the visual aesthetic, it was wonderfully colourful and stylised. Much like The Personal History of David Copperfield, it felt fresh and full of light.

I stand by my initial impression that some of the casting and characterisation was a bit dubious. Harriet was made to be too stupid, Frank Churchill was just a dick (as opposed to a charmer who is stealthily a dick) and Miranda Hart’s Mrs Bates just didn’t work for me (though I can’t really pinpoint why). It was also like a weird Sex Education reunion with Tanya Reynolds and Connor Swindells popping up, and given Reynolds’ character’s sexual proclivities, it put a rather odd spin on things.

Johnny Flynn was definitely too young, but Leena Norms puts it beautifully when she talks about his presentation of a more progressive masculinity. Mr Knightley is supposed to be older, stand-offish, and highly critical of Emma. Instead, we had a Knightley who was openly tortured by his growing love for our heroine, who genuinely seemed to criticise in the belief that she could be better rather than being driven by more misogynistic undertones.

Likewise, Emma was incredibly bratty, but was also vulnerable and human in a way I’d not seen in other adaptations. Here was an Emma who wore her emotions openly, the good and the bad, and so we saw a far deeper level of emotional progression over the course of the story. This was an Emma and Knightley that I believed in far more than any other because of who where they had started and who they had grown into.

I still believe that Clueless is the best adaptation of Emma, but am happy to anoint this a comfortable second.

I don’t know how this film was able to be so flagrant without being sued for something, but this is basically story based on the life of Philip Green without saying it’s about Philip Green. Steve Coogan plays the thoroughly revolting Sir Richard McCreadie who is throwing himself a lavish birthday party, David Mitchell plays his biographer. Through flashbacks we see McCreadie’s rise to riches through financial means that I’m still astonished can be legal, culminating in a rather dramatic turn of events at said lavish party.

I’m not a fan of Steve Coogan, though I can’t deny his ability to personify cringingly objectionable characters. There were some odd moments that didn’t really land for me around refugees, but I was glad to find that there was a genuine point around fast fashion and this industry’s reliance on unethical work practices.

It’s one to see if you want an easy watch with a moral message, but not one to worry about if you miss.

The honeymoon preparations are in full swing so I can’t promise I’ll see any of the below in good time but here’s what I’ve got my eye on:

Have you seen any of these films yet? Let me know your thoughts in the comments down below!