Last week, I started a new initiative – nails for charity. To see the pictures from my first week, click here.
Week Two has brought with it some great new designs to try, not to mention a sprinkling of Halloween spirit! 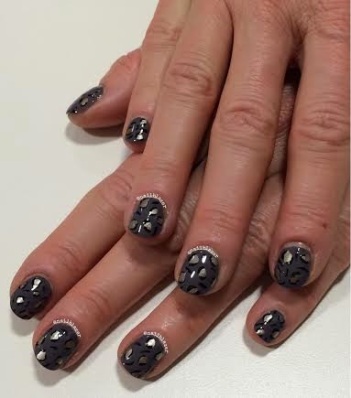 These nails belong to a lady who I’ve sat close to for a long time but have never really had the chance to get to know. She is going home this weekend to attend a gala and wanted a design that would complement her black and white top. She was another customer who’d come in saying “grey” but after some Pinterest browsing we settled on a leopard print to give her something a bit more special.

Another “do what you want Martha!” from this French lady. She had eventually narrowed it down to a dark red base, but beyond that it was a blank canvas! After some more probing, she told me that she is attending an Indian wedding this weekend, and would be dressed in red and silver. Voila! Silver swirls 🙂

This is another colleague I’d never had the chance to get to know and I found out she’s taking an interior design course outside of work – how exciting! I found it exciting anyway, I’d love to be good at that kind of thing. She saw my Inspired By a Pattern post from the 31 Day Challenge and requested this design. 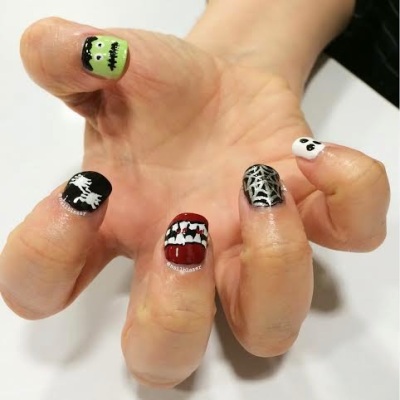 This is my first official ‘regular’ lady! Delighted to be able to say that 😀 So far she has been the most adventurous and was very clear that she wanted Halloween nails this week. I did a Halloween-themed wheel in preparation and she chose a different design for almost every nail.

I used (brace yourself):

This colleague is a real treasure – she always smiles at me and says hello and FYI she makes an excellent Tiramisu cake. Just in case you’re ever in need…

She saw my Delicate Print post from 31DC14 but we decided on a magenta-red colour for the print, rather than the original pale blue.

This cheeky friend of mine hijacked M and S’s appointments to get some last minute Halloween nails after seeing the themed nail art wheel sitting on my desk – I could hardly refuse! She went for cobwebs on her fingernails and ghouls on the thumbs.

The brief here was very clear – “orange and black only! But I really like that silver cobweb…”. We decided on a silver cobweb for three nails on each hand, and then little black spiders on an orange base for the rest.

My final lady from Week 2 liked the look of the confetti dotticure I did for Wave of Polish but preferred the colour combination of pink and violet.

Wrap up of Week 2

Another busy week, and what have I learned? A lot of the same lessons as last week, but some new nuggets too: